Opera Saratoga and Proctors Collaborative join forces to bring you a New Year’s Eve concert at UPH, featuring Broadway and Opera Star Zachary James with pianist Laurie Rogers! The festive concert will feature a variety of popular, Broadway and classical favorites; and will build up to Opera Saratoga’s much anticipated announcement of its 2022 Summer Festival Programming!

Bass Baritone Zachary James is well known to local audiences for his remarkable portrayal of the title role in Opera Saratoga’s production of Man of La Mancha this past summer on the SPAC Amphitheater Stage. On Broadway, Zachary created the role of Lurch in The Addams Family, and has also been seen in South Pacific, and Coram Boy; while his Off-Broadway credits include The Most Happy Fella, Irma La Douce, Sweeney Todd, and The Pirates of Penzance. As for the opera stage, Zachary has performed across the globe; from the Metropolitan Opera to the English National Opera. He has also recorded multiple solo albums including his most recent Christmas release, Wonder and Joy.

Zachary will be joined by pianist Laurie Rogers, who recently celebrated her tenth anniversary as Opera Saratoga’s Head of Music Staff and Director of the company’s Young Artist Program. Laurie has served as Associate Conductor with LA Opera and has prepared productions for San Francisco Opera, Houston Grand Opera, Dallas Opera, the Canadian Opera Company and many more!

“Together with UPH, Opera Saratoga is thrilled to be able to offer this free concert to the community, to thank them for their ongoing support, and to bring us together as we look forward to the year ahead!” Lawrence Edelson, Opera Saratoga’s Artistic and General Director 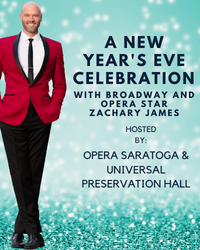