Nacre Dance Group’s production is based on choreographer Charles Weidman’s later version of “Christmas Oratorio” which opened in New York City in 1961 to wide critical acclaim, and has remained a much-loved classic work of modern dance.  This historic work tells the story of the Nativity through modern dance.  Set to Bach’s music of the same name, this rendition of the work focuses on feelings and emotions of joy to usher in the holiday season. 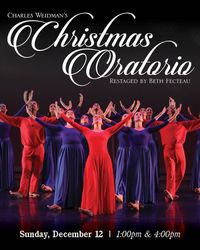