Always in the process of reinventing his musical language, composer Jean Félix Mailloux now transports us into the universe of Leonardo da Vinci. The musicians of Cordâme interpret these music and songs inspired by the Italian Renaissance with great sensitivity. This show at the frontiers of chamber music and jazz will make you experience a whole range of emotions with surprising music, transcending beauty and wonder.

The music of Cordâme is certainly unclassifiable but has a potential to please both classical music enthusiasts and jazz fans. They are bringing the chamber music in Canada to a whole new level of excitement with extensive tours across North America in recent years. Captivating crowds and getting very positive reviews in the press. Cordâme is one of the busiest ensembles in Canada, playing around 40 concerts each year in a variety of venues and festivals.

“What stands out as the crown jewel of this Da Vinci Inventions is the presence of the sublime Coral Egan. This angelic voice, with a perfectly centered timbre, without any lyrical vibrato out of context and above all this stunning plastic ease coupled with a perfect accuracy, it is bewitching. ” Frédéric Cardin, Panm360

“The ensemble invites us to a magical moment.” Sylvie Mousseau, Acadie nouvelle

“It’s playful, well-layered and orchestrated, with brilliant spaces created for each instrument to have its melodic turn in the spotlight.” Caryn Havlik, WNYC Radio

Cordâme is a very dynamic ensemble dedicated to the interpretation of the compositions of Jean Félix Mailloux. Formed in Montreal in 2004, Cordâme is a finalist for the 2018 RIDEAU Tour Award, this award honors an artistic company, a group, an artist or an artist representative for their fruitful efforts to promote and raise public awareness during a tour. Cordâme is a finalist for the OPUS Prize, Jazz Concert of the Year 2018 and 2020. Having released 8 albums in 17 years, the group is certainly one of the most active on the Quebec scene. The discography devoted mainly to the compositions of Jean Félix Mailloux highlights an instrumentation which changes from one disc to another and which has stabilized around a group of six musicians.  The group has toured extensively with a show called Debussy impressions wich is also the 6th album of the ensemble, it was released in December 2018 and has had several great reviews since. The piece Plante cameleon from Debussy impressions is airing on SIRIUS XM.

In 2019, Cordâme received a commission from Orford musique to create the show Da Vinci inventions and a commission from Radio-Canada to adapt 2 pieces by Ravel for videos filmed at the famous Studio 12. The recent Satie variations tour was a great success. with a grand total of 60 performances over 2 seasons in Quebec only. This concert includes creations inspired by Satie as well as pieces by Satie re-composed by Jean Félix Mailloux. The group also collaborated with pianist François Bourassa with whom the ensemble released the album Rêve éveillé. 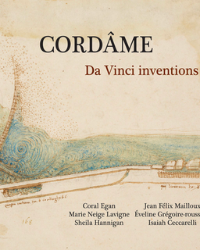