Judas Maccabeus was a Jewish freedom fighter and military genius who defended his country from invasion and secured freedom of religion for the Jewish people in 160 BC. Handel composed this oratorio, which is the story of Judas’ life set to music, in 1746. It has become Handel’s most popular oratorio, second only to The Messiah.

To perform two of the lead roles, Saratoga Voices has engaged the talent of two internationally and nationally renowned vocal artists with strong dramatic experience. Tenor Thomas Cooley sings the title role of Judas Maccabaeus and baritone Jesse Blumberg sings the equally heroic role of Simon, the brother of Judas. 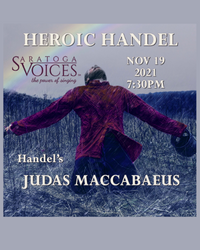