The Screaming Orphans – four Irish sisters from County Donegal, Ireland – are bringing the party to Saratoga on St. Patrick’s Weekend with a good old-fashioned Irish Hooley. There will be special guests and activities; food, beer and spirits will be available for purchase; and the Orphans will perform their hits alongside traditional Irish favorites.

If you haven’t heard the Orphans, you’ve been missing out. The Screaming Orphans are a fan favorite at Irish festivals across the U.S. and Canada. Their collection of 12 albums and an E.P. are widely regarded. Their latest CD, “Taproom”, landed at number one in the iTunes World Music charts and was in the Top 10 on the Billboard World Music chart. They have recorded with Peter Gabriel, performed with Joni Mitchell on a Chieftains album, backed Sinead O’Connor on a tour, have been named Best Rock Band at the Irish Music Awards. 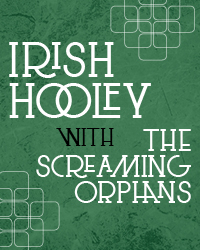