Famous for defending the Chicago Seven and his involvement at Attica and Wounded Knee, attorney William Kunstler had an outsize personality and a tremendous appetite for life. In this two-character drama, tensions flare when he arrives on a college campus to give a seminar. The brilliant young law student assigned to introduce him objects to his appearance and is determined to confront him. Has Kunstler finally met his match?

“Wise and revealing. A skillful script. An eye-opening history lesson. Jeff McCarthy seduces his audience. Mr. McCarthy has the Kunstler style down pat…”
– The New York Times
“Kunstler stars Jeff McCarthy, masterfully exuding charm and a kind of shaggy elitism. For much of the 90 minute production, you are in the hands of a master storyteller.”
– Talking Broadway
“Quick! Don’t dally! Race to get tickets for “Kunstler.” The splendid play by Jeffrey Sweet featuring a dazzling, the sky’s the limit performance by Jeff McCarthy.”
– Theatre Pizzazz!
“William Kunstler, the legendary American civil-right attorney…rumpled, robust and fully realized way by Jeff McCarthy in “Kunstler,” a frequently funny bio- drama. “Kunstler” doesn’t try at all to force relevance to today. It doesn’t have to. The resonances are powerfully evident on their own.”
– Albany Times Union
NYC Picks: 10 Best Things
– Newsday
“This fascinating production provides a unique insight into Kunstler’s life and times. With superb staging this two hander features the impeccable acting of Jeff McCarthy. The show is timely as it addresses many of the civil liberty issues that Americans are facing today.”
– Broadway World
“It takes a showman to play a showman. The late political activist lawyer William Kunstler couldn’t have asked for a more consummate showman to represent him on stage than actor Jeff McCarthy.”
– Berkshire Eagle
“…it is clear that Kunstler was prescient in his jaundiced view of American jurisprudence. His revelations and reminiscences enjoy an uncanny parallel to national events being replayed today with a new cast of characters.”
– Curtain Up Berkshire Review
“It’s surprisingly powerful and twenty-two years after his (Kunstler’s) death, the message remains timely perhaps even essential. McCarthy… is riveting…”
– Theatre is Easy (NYC Best Bet)
“…a political drama with the heart of a situation comedy about trust and love and experience, those things that make up true conviction. It’s a very worthwhile trip.”
– Berkshire Bright Focus 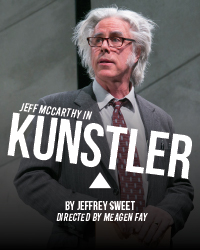