Lucky Chops comes at you with every hue on the rainbow.

“Our strength is having individual members who get to express themselves as part of a whole that is more than the sum of its parts,” says Behroozi, a Brooklyn native whose polyglot Iranian/Dutch/French/German background has led to his interest in everything from Middle Eastern sounds to the tradition of the Balkan brass bands.

Starting in the underground halls of New York City’s subway stations, Lucky Chops first learned to entertain by busking for crowds from all over the world. Their talent did not go unnoticed, as a video of their mash-up of Lipps, Inc.’s “Funkytown” and James Brown’s “I Feel Good,” which has amassed hundreds of millions of views across social media and led to an online subscriber base almost two million strong.

The band returns to the road for the first time since the end of 2019, and on the heels of the release of their second full-length album, New Day, planned for release this fall.

Lucky Chops is hosting VIP events prior to the show, giving a chance for their fans to get together and celebrate good music in a small setting.

VIP attendees will be treated to an exclusive performance, story telling, a question and answer session with the band, photo and autograph sessions and everyone will walk away with exclusive merchandise only available to VIPs at each show.

The VIP Experience is an additional $45 on top of your ticket price. Quantities are limited, first come first serve. 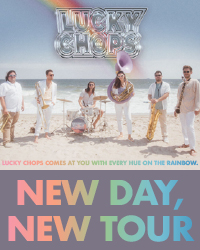