With her upcoming Verve Records debut, Linger Awhile, 22-year-old Samara Joy makes her case to join the likes of Sarah, Ella, and Billie as the next mononymous jazz singing sensation recorded by the venerable label. Her voice, rich and velvety yet precociously refined, has already earned her fans like Anita Baker and Regina King, appearances on the TODAY Show and millions of likes on TikTok — cementing her status as perhaps the first Gen Z jazz singing star. On Linger Awhile, Samara will introduce that massive audience to a slew of classic standards several times older than she is through her timeless, irresistible sound.

Samara is still relatively new to jazz. Growing up in the Bronx, it was music of the past — the music of her parent’s childhoods, as she put it — that she listened to most. She treasures her musical lineage, which stretches back to her grandparents Elder Goldwire and Ruth McLendon, both of whom performed with Philadelphia gospel group the Savettes, and runs through her father, who is a singer, songwriter and producer who toured with gospel artist Andraé Crouch. “Sometimes I catch myself when I’m singing — I’m like, ‘Whoa, that was a dad moment’,” Samara quips. Eventually, she did follow in the family tradition, singing in church and then with the jazz band at Fordham High School for the Arts, with whom she won Best Vocalist at JALC’s Essentially Ellington competition. That led to her enrolling in SUNY Purchase’s jazz studies program, where she fell deeply in love with the music.

Though she’s young, she relishes the process of digging through the music’s history and learning new standards. “I think maybe people connect with the fact that I’m not faking it, that I already feel embedded in it,” Samara says. “Maybe I’m able to reach people in person and on social media because it’s real.” The gatekeepers of the jazz world tend to agree: in 2019, she won the Sarah Vaughan International Jazz Vocal Competition, and she’s since performed with legends like Christian McBride and Bill Charlap. Legendary late pianist Barry Harris was a particularly important influence and mentor. “You inspired me as well as many others with this fire for teaching and playing that couldn’t be dimmed by anything or anyone,” Samara writes in Linger Awhile’s liner notes, dedicating the project in part to Harris’ memory. 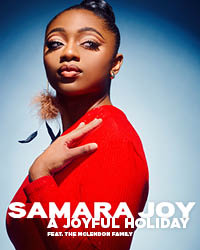