This performance has been postponed. All ticket buyers will be contacted by a Box Office representative.

Take a star-studded journey through rock ‘n roll history with these legendary Musicians Hall of Fame honorees who sang, played and/or recorded with some of the biggest names in music: Elton John, Carole King, Cat Stevens, Jim Croce, Carly Simon, Rod Stewart, Frankie Valli & The Four Seasons, and performed with members of Journey, Toto, Foreigner, Cheap Trick, The Rascals, Three Dog Night, The Turtles, The Who and many others.

The Hit Men are the actual musicians and singers you heard on the original records, listened to on the radio, watched on TV or saw in concert. In this exciting and unique multi-media show, The Hit Men dazzle audiences with number one hits by artists they have performed with on stage and in the recording studio – songs like “Don’t Stop Believing,” “Oh What A Night,” “Africa,” “Pinball Wizard,” “I Want To Know What Love Is,” and “Joy to the World.” Their show is like no other as they take you behind the scenes with stories about what it was like on the road and in the recording sessions with rock royalty. Relive rock’s greatest hits, the way you first heard them. Experience the soundtrack of your lifetime…by the original guys who made and played it – The Hit Men – Keeping the music alive….and keeping it real! 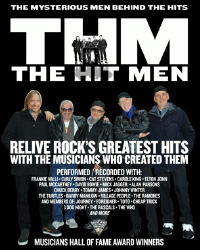