Sam Cooke, AKA Mr. Soul, pioneer of what we have now come to know as SOUL MUSIC. His influence has spanned over 60 years and touched every single individual, directly and or indirectly, in every genre of music from Country to Rock to Pop. His influence can be hidden behind the veil of his music but when you truly dissect his life you’ll find that his true influence lies in his business acumen and willingness to blaze a trail for himself and others of his elk in a time when it wasn’t socially acceptable to even use the same bathrooms as whites let alone own your record label, own your own publishing and artist repertoire, perform on non segregated stages all while being an avid contributor to the equal rights, civil rights movement.

As a Musician, Actor, Producer, Educator & Social Activist Bradd Marquis performs the songs written and sung by Sam Cooke to curate and narrate a show that not only entertains, but informs his audience on a historical time loaded with lessons about life, self- empowerment and social change that are still relevant and necessary to this day. Bradd Marquis transports you back in time through the life of Sam Cooke a.k.a. Mr. Soul – from birth, to a preacher son in Clarksdale, Mississippi, to his recruitment into the number one Gospel Group, The Soul Stirrers in Chicago, to his secular music crossover, to his rise to a pop icon and his tragic death as he began to transform into a social activist. 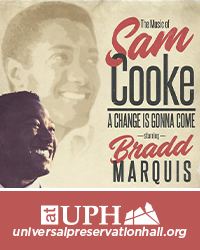